Want to live and work in paradise?
Grand Isle Resort, a spacious and gated second-home community with resort amenities, has pivoted to offer special packages for guests looking to stay 30 days or more. 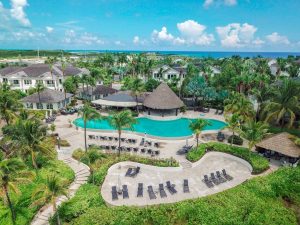 Read more about it here: http://bit.ly/long_termrentals

‘Pigs of Paradise’ to enter second edition in 2020

‘Pigs of Paradise’, the double award-winning book on the world-famous swimming pigs, will enter a second edition in 2020, the publisher has announced. 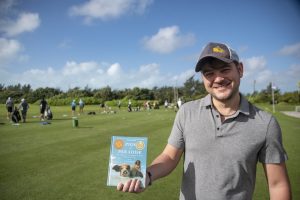 Skyhorse Publishing, based in New York, plans to release an expanded edition of the hardcover in November, including new photography and additional content on the pigs’ continued rise to fame. While the swimming pigs are already a household name for millions worldwide, the attraction has continued to evolve and grow, sparking new businesses and in many ways transforming the tourism product of The Bahamas.

“Nobody could have predicted just how popular the swimming pigs have become,” said T.R. Todd, author of ‘Pigs of Paradise’, who is also Director of Communications for GIV Bahamas Inc.

“Exuma will always be where it all started. This edition though will really delve into how the pigs have become so important for so many people in The Bahamas. It has become an attraction that has touched so many lives. So, in addition to new, great photos, we really want to update the book, so it represents the entire country.” 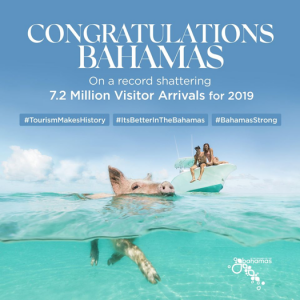 At last count, there are at least seven pig colonies in The Bahamas.

Abaco, Eleuthera, Grand Bahama, and Nassau all provide the attraction for tourists, in addition to the two colonies in Exuma. Treasure Island, a private cay in the Berry Islands, have also spent millions to create a swimming pig attraction that is easily accessible to the millions of tourists passing through on cruise ships.

Other than sun, sand, and sea, the swimming pigs are a common denominator and an important symbol of the country’s tourism product. Earlier this month, The Bahamas Ministry of Tourism announced that 2019 broke the record for the most visitor arrivals, with 7.2 million people arriving to these shores last year. More than ever, The Bahamas remains an appealing destination for those seeking a warm getaway. To promote this message, the Ministry of Tourism chose a very simple image – that magical pig, swimming in the most pristine water in the world.

“The swimming pig is our Mickey Mouse,” explains Peter Nicholson, President of GIV Bahamas Inc., who is also the Executive Producer of the film based on Todd’s book. 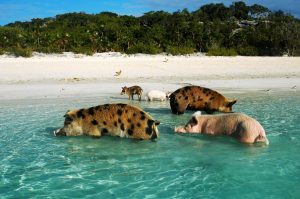 “First off, it was an accident – a fluke of nature. I think that is why it endures to this day. It was never intended to be a tourism sensation. It speaks to the nature of today’s tourists.  They want something truly unique, but also authentic.”

In addition to the expanded content, ‘Pigs of Paradise’ has launched a photo contest, asking the general public to submit their very best photos with the pigs for a chance to be featured in the second edition. The book is also working with well-known influencers, with followers running well into the millions. 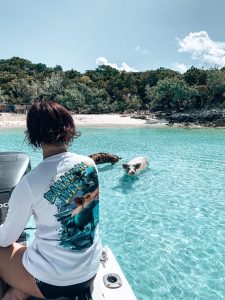 “And part of what has made the book successful is the fact it is equal parts great story but also highly illustrative. It is right at home on your coffee table as well.”

Photo submissions are ongoing. Anyone wishing to enter the contest must submit their photo to Atomic Lavender Social Media Management by March 15. 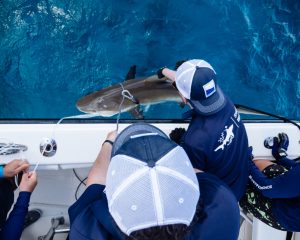 The most exciting and innovative tourism offering in the Caribbean is returning to Grand Isle Resort & Spa.

Ever wondered what it would be like to see shark research and tagging “live”, and not on TV? Now is your chance to participate in an exhilarating Shark Tagging Adventure, while also doing your part to protect sharks and preserve our oceans.

We want to add you to our Shark Tagging list. The next scheduled trips are February 23 and 23. Availability is very limited.

Wondering what your excursion includes? Dr. Gallagher will be joined by other leading researchers, all of whom take guests step-by-step through the process of tagging sharks.  You will experience hands-on shark research with marine biologists, stepping into the shoes of a scientist, contributing to shark conservation, and so much more. Get ready for adventure! 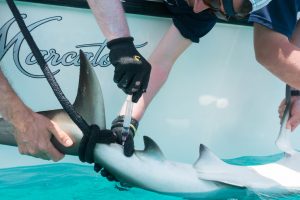 To learn more about Grand Isle’s Shark Tagging Adventures, and book your spot, you can visit the resort’s dedicated page here. 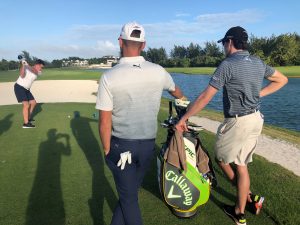 Emerald Bay once again shined bright earlier this month when it played host to the Korn Ferry Tour, an event that is rapidly becoming a can’t-miss staple in the Exuma tourism calendar.

The Emerald Bay Golf Course, an 18-hole, par 72 championship course designed by golfing legend Greg Norman, served as the centerpiece for a tournament that attracts an eclectic mix of up-and-coming talent and scrappy pros looking to get back on the PGA Tour.

On either side of Emerald Bay, book-ending a powdery, mile-long beach, was Sandals and Grand Isle Resort & Spa, both of which were jammed for the festivities. While some came as spectators, others arrived to participate in the Korn Ferry Tour’s Pro Am on Jan 9 and Jan 11th. These guests enjoyed cocktail parties, welcome gifts and a tournament where they are paired with a golf pro.

GIV Bahamas Inc., the largest owner of villas at Grand Isle Resort and a long time supporter of the tournament, fielded two teams in the competition, with one of them coming out on top as the 2020 champion. 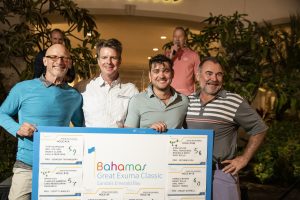 “Grand Isle Resort has really woken my wife and I up to a place like Exuma,” said Doug Smith, a former player in the NHL and the owner of Doug Smith Performance.

“Both the resort, the tournament and Sandals were all first class. This island has changed us for the better and helped us clear our thinking. I believe it is the safety you feel in the hands of the Bahamian people, combined with the sheer beauty of the area. It was simply phenomenal.”

Doug Smith’s winning team, which included Craig Campbell, Ian Davidson and Jeff Todd, director of communications for GIV Bahamas Inc., was paired with surging pro golfer Adam Svensson. Prior to the tournament, participants in the Great Exuma Classic’s Pro Am are able to visit both Sandals Emerald Bay and Grand Isle Resort, taking advantage of the restaurants and amenities at both properties.

For Grand Isle, a special VIP party was hosted in one of the property’s four-bedroom penthouses, giving golfers a glimpse of the large, luxurious villas. While most guests come to Grand Isle as a resort guest, it also allowed golfers to see opportunities for home ownership.

“What’s great about this event is it really let’s people see everything Emerald Bay has to offer,” said Peter Nicholson, the President of GIV Bahamas Inc. “Sandals is a great partner and we thank them, along with BD Global Sports, for their amazing leadership. GIV Bahamas Inc. has supported this tournament from the beginning and I’m so pleased to see it continuing to grow.” 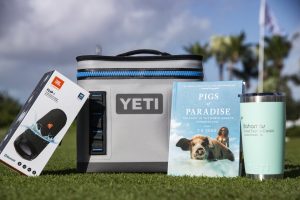 Held from January 12 to January 15, The Great Exuma Classic is the first event on the Korn Ferry Tour, with US$600,00 in prize money up for grabs. The Greg Norman Signature Course, surrounding both Sandals and Grand Isle, is a true test for even professional golfers, with the back nine entirely on the ocean. As in past years, the tournament was televised on NBC’s The Golf Channel.

High winds made for challenging conditions for both the Pro Am and the first day or two of the Great Exuma Classic. In the end, it was Tommy Gainey, a 44-year-old journeyman who took home the top spot.

Gainey, who in the past has earned $5.6 million in 200 career starts on the PGA Tour, turned in a final-round 69 to finish the tournament at -11. Dylan Wu and John Oda tied for second with -7, followed by Will Zalatoris and Sean O’Hair at -6.

Registration now open for an exclusive experience in 2020, allowing tourists to assist and participate in scientific research 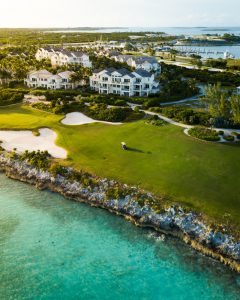 A truly unique and mind-blowing experience in the Caribbean is returning in early 2020 to Grand Isle Resort & Spa.

Shark Tagging Adventures, where you have the opportunity to learn and participate in crucial scientific research, will be taking place in Exuma for the last two weeks of February. After being greeted at Grand Isle reception, guests are transported to a boat where they receive an intimate briefing on why shark tagging is so important, and what adventures they will experience that day.

Of course, the anticipation can never quite live up the reality, when you eventually come up close and personal with one of the most majestic and misunderstood animals in the world.

“In the last year, this program exposed more than 100 people of all ages to the world of shark conservation. Tagging and releasing 67 sharks in the region, including tigers, bills, reef sharks and nurse sharks,” said Dr. Austin Gallagher, the renowned biologist, and shark expert.

Registration for February is now open. You can also fill out a form indicating another time of year that might work best for you. 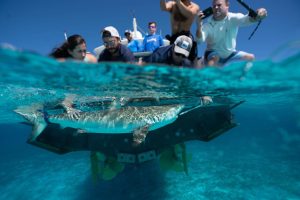 Dr. Gallagher will be joined by other leading researchers, all of whom take guests step-by-step through the process of tagging sharks.

“I have performed research like this all over the world,” Dr. Gallagher adds, who is also the founder of a nonprofit NGO called Beneath the Waves.  “The Bahamas is a protected area for sharks. And Exuma itself is such an amazing frontier – I like to call it the Serengeti of the Ocean. To expose everyday people to these animals and this research is special. Their faces light up every time. It never gets old.”

Covered by Forbes, Lonely Planet, Scientific American, and many others, this new tour took the Internet by storm in 2018. In addition to being a true unique experience, guests have been captivated by the opportunity to participate in and support genuine scientific research. 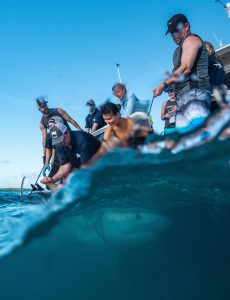 Shark Tagging Adventures is a public-private partnership between Beneath the Waves and Grand Isle Resort & Spa, whereby Dr. Gallagher and his team receive a donation of at least US$500 for every person on the tour. This donation goes directly to protecting and monitoring The Bahamas shark population.

To learn more about Beneath the Waves and why sharks are so important to the future of our oceans, click here.

You can also watch a video testimonial of past shark tagging guests here.