‘Pigs of Paradise’ returns home in grand style at 23 North 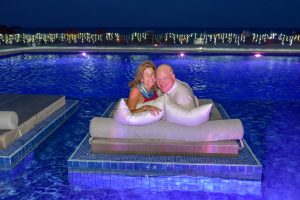 The new film based on the swimming pigs returned home in “grand style” earlier this month when it took over Grand Isle Resort’s new $4.5 million beach club, 23 North, for an exclusive screening under the stars.

This event capped off a world tour of sorts for ‘Pigs of Paradise’, a full-length documentary that chronicles the origins and rise to fame of the worldwide bucket list attraction. After appearances in Fort Lauderdale, the Cannes International Film Festival and a screening with the Bahamian Minister of Tourism in Nassau, the pigs paddled back to where it all started in Exuma.

“It feels like we have come full circle,” said Peter Nicholson, President of GIV Bahamas, the largest owner at Grand Isle Resort, and Executive Producer of the film. 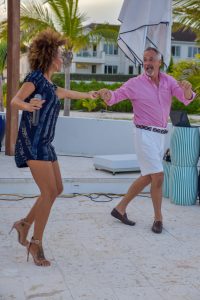 “Sometimes you just have to sit back and smile at the impact of these swimming pigs, and how far we’ve come as an island.

Exuma has always been one of the most beautiful places in the world. The pigs are just the differentiator. They opened up people’s eyes to these world-class islands and Exuma has been a different place ever since.”

And the momentum does not seem to be slowing down anytime soon.

In addition to the world tour, ‘Pigs of Paradise’, following its visit to Cannes, recently signed an international distribution agreement with a firm in Los Angeles, opening the door to opportunities on network television, streaming services and even a possible mainstream theatrical release in late 2019 and into 2020.

Meanwhile, the book on which the film is based, by T.R. Todd, is rapidly approaching bestseller status, having won two international awards in recent months. The book has also been featured in two major in-flight magazines this summer, including British Airway’s ‘High Life’ in June and American Airline’s ‘American Way’ in July. 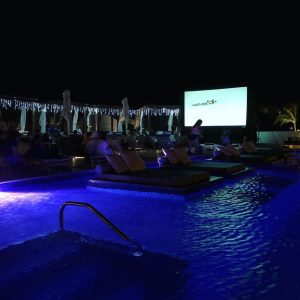 Both Todd and Charlie Smith, the film’s director, were on hand for the festivities at Grand Isle Resort from July 4 to July 8.

Grand Isle’s new beach club proved to be the perfect venue not only for ‘Pigs of Paradise’, but a series of films curated by the Fort Lauderdale Film Festival. The beach club now offers Grand Isle guests a second infinity pool, a fine dining restaurant, and a full bar and towel service right on Emerald Bay Beach.

The festival’s organizers and their fans initially flew down for 4th of July celebrations and a pool party at 23 North with live
entertainment, DJs and bottle service at the club’s private cabanas.

“Although the swimming pigs are now known around the world, this is a Bahamian story,” according to Smith, who also directed the breakthrough short film, ‘When Pigs Swim’.  “They are a point of pride for many people, not just in Exuma but other islands in The Bahamas as well. Beyond that, they are a huge part of the economy now and a source of livelihood. So it was a true honour to show the film back in The Bahamas.”

According to recent consumer polls, at least half of all guests at Grand Isle Resort came to Exuma due to the swimming pigs. Appearing in magazines, newspapers, television shows, movies, and countless social media posts, these unique animals first burst on the scene in 2013 when Nicholson and Todd commissioned the short film, ‘When Pigs Swim’. 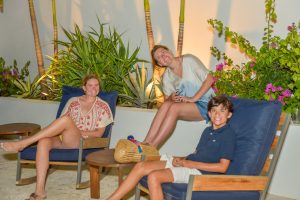 A series of collaborations and marketing campaigns with ABC’s The Bachelor, NBC’s Today Show, Angry Birds, the Bahamas Ministry of Tourism, and many others, rapidly brought their story to the global stage.

Today, there are an estimated nine pig colonies scattered throughout The Bahamas on multiple islands, contributing millions to the country’s GDP every year.